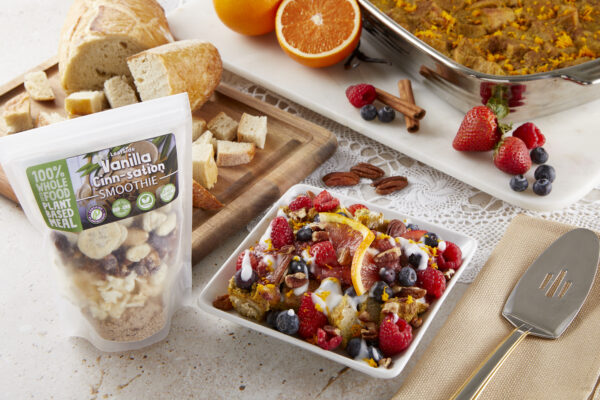 Share this meal with your loved ones, and they’ll be amazed that you delighted their taste buds with a sweet treat that includes cancer-fighting cauliflower! This baked goodie also features brain-boosting pecans, iron-rich raisins, disease-fighting dates, and a warm, aromatic spice mixture. Cherish everyone’s smiles as they choose their favorite toppings and tell you how much they love this terrific toast!

1 (14oz.) loaf bread (should be stale when ready to use; recommend something with sourdough)

Cinnamon is one of nature’s gifts, with a delicious and inviting scent and satisfying taste, that like other herbs and spices, delivers very high amounts of antioxidants too.

There’s just one catch: the most common form of cinnamon in the US is cassia cinnamon that contains coumarin, a substance that in high amounts, can damage the liver. So be sure to get Ceylon cinnamon that doesn’t deliver coumarin, only the good stuff. At LeafSide we only use Ceylon cinnamon, and only the tastiest organic forms we can find.

Want more recipe ideas that add variety and value to your LeafSide meals?

You'll create an account during the checkout process, rather than here.

Wondering whether to join the LeafSide? Check out the homepage or FAQ.

After you login to your account, you'll be able to update your subscription, preferences, contact information, etc.